TAPS AF can be upgraded to MigrationFX to enable not only the provisioning of new phones but also the migration from old Cisco phones to new Cisco phones.

This short video demo of TAPS AF shows how easy it can be to ROLL OUT new Cisco phones the fast and easy way.

However, it may be that you’re not replacing phones but simply adding in new ones. So, for example, are you expanding your estate of Cisco IP phones? Or are you looking for a quick and easy assignment of CUCM device configurations for un-provisioned Cisco Phones?

Then look no further TAPS AF, a subset of our MigrationFX product is here to assist you.

With TAPS AF you can Roll out and implement your additional Cisco Phones the fast and easy way. 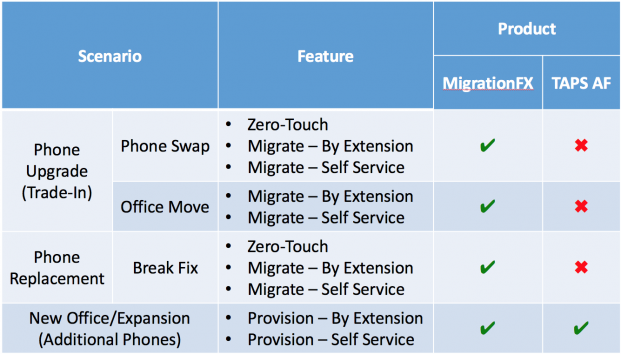 With TAPS AF you simply dispatch the phones to the users en-masse, unpack the new phone from its box and enter an extension number.

Note: If installing on Windows 7 or Windows Server 2008 then Windows Management Framework 3.0 is also required:https://www.microsoft.com/en-us/download/details.aspx?id=34595

Note: On some occasions, a CUCM update or device pack may be required to support new phone models

Join us for a live introduction to MigrationFX

What our clients say

Thank you for your great product!

"Our migration was completely successful. We moved nearly 10,000 phones within 4 hours from the old cluster to the new one.Thank you for your great product!"

The biggest advantage of PhoneView

"I am a huge fan of what you've done with PhoneView.  It's a fantastic product.  I have recommended it to many people."

"Unbelievably great product that I really feel should be a part of every company’s VOIP Engineer software list."

"The scripting for the ITL/CTL changes was a great asset."

Who We Are
Get In Touch
Term and Conditions

By continuing to browse the site you are agreeing to our use of cookies.